Joint Statement Calling for Resolution of the Issue of Japanese Military Sexual Slavery from the Women of North and South Korea, and those Standing in Solidarity  to Commemorate the Centenary of the March 1st Movement
March 1, 2019​

​Background: The Korean Committee on Measures for the Sexual Slavery for Japanese Army and Drafting Victims (조선인일본인위안부강제연행피해자문제대책위원회) from North Korea and the Korean Council for Justice and Remembrance of the Issues of Military Sexual Slavery by Japan (정의기억연대) from South Korea spearheaded writing the joint statement. As part of the Committee for Executing the Joint Proclamation from North and South Korea in 2019 Alliance (‘남북공동선언 이행을 위한 2019년 새해맞이 연대모임’ 추진 위원회), the members of both organizations met from February 12–13 at Mount Kumgang in North Korea and began discussing the plan. During those two days, more than 200 South Koreans, including victims of Japanese imperialism, family members of victims, activists, and scholars, attended this special meeting to discuss ways to address the past crimes of the Japanese military committed against Korea as a nation and its people before and during WWII. South Korean citizens actively participated in the fundraising drive for the advertisement, organized by the Korean Council. Within a week, South Korean citizens and overseas organizations donated enough money to pay for the half-page advertisement in The Washington Post on March 1, 2019. The joint efforts of the women from North and South Korea were soon strengthened by other organizations in South Korea and overseas. The international joint statement advocates peace in the Korean peninsula and seeks long-overdue justice for the victims of the Japanese imperialism. 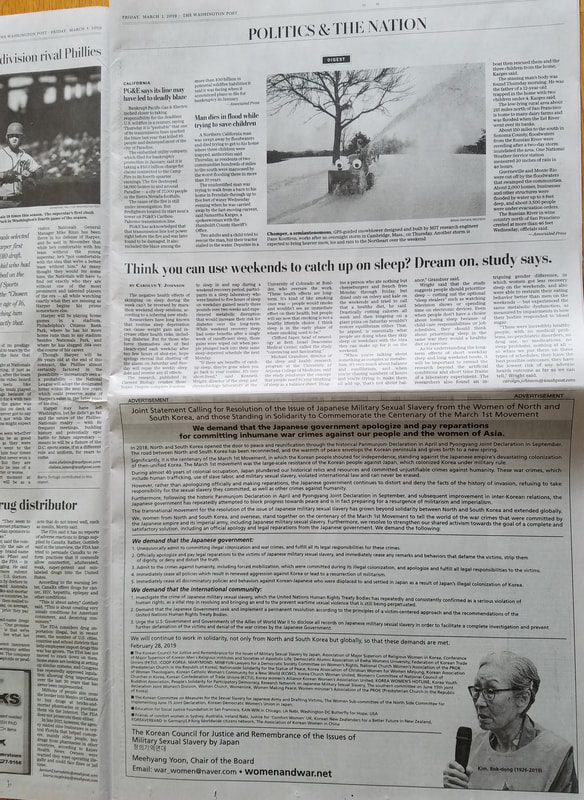