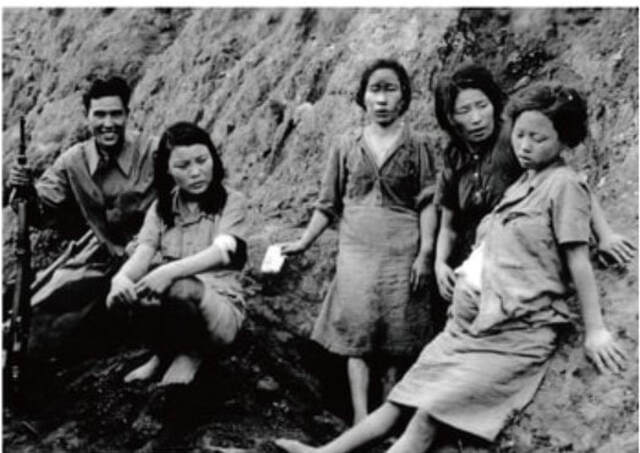 ​Background: While stationed in China from 1937 to 1940 during the Second Sino-Japanese War, Murase documented the horrors of war through photography. In his book, My China Front, he included close to two hundred photos, voicing his opposition to the war and condemning the atrocities the Japanese government committed against civilians and soldiers. Murase died a year after this book was published.
Location: Hankou, China
Photographer: Moriyasu Murase
Source: Murase, Moriyasu. My China Front 『私の従軍中国戦線』, (Japan, 1987), 106–107.

​Background: This is a condom given to Japanese soldiers at “comfort stations.” The text on the front wrapper “突擊 一番” translates to “Attack Champion.” The text on the back “國際護謀納” translates to “Provided by International Rubber,” which is a present-day Okamoto, オカモ工業, Japanese condom company. Objects and texts are primary sources from the time period. This particular object and text are clear evidence of imperialism, reinforcing the false image of women as objects to be conquered or war prizes.
Photo credit: Pacific Atrocities Education
go back