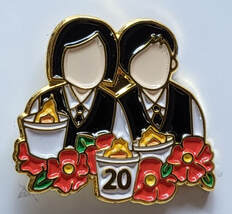 On June 13, 2002, in South Korea’s Gyeonggi province, a U.S. armored tank driven by two U.S. military personnel ran over thirteen-year-olds Hyo-Soon and Mi-Sun. Both eight-grade girls died on the spot. South Korea’s Ministry of Justice requested the U.S. waive the right to try the two soldiers in the U.S. so that South Korea could try them. However, based on SOFA, the U.S. rejected the request. A U.S. court-martial found both of the accused not guilty of negligent homicide in November 2002. The picture of the pin above is a 20th-anniversary pin commemorating Hyo-Soon and Mi-Sun.
Brief Background
Stereotypes, discrimination, and violence concerning AAPI populations have existed for quite some time. Here are a few more recent examples showing that there is still a long way to go.

​In March 2021, a shooter in Atlanta murdered eight people, including six Asian American women, out of a supposed attempt to eliminate his sexual temptations. In his sexist, racist eyes, his victims were reduced to stereotypes. What happened in Atlanta represents yet another chapter of continued sexual violence against women of color in the United States. Gender-based violence is a global plague and one of the worst forms of human rights violations. It also tends to have a far more pronounced impact on marginalized populations, and especially so on racial minority women.

Since the pandemic was incorrectly framed as “China-flu,” the human rights and safety of AAPI women became even more perilous. According to the 2021 Stop AAPI Hate National Report, covering incident reports to Stop AAPI Hate from 2020 to December 2021, the number of hate incidents reported to the center increased from 4,632 in 2020 to 6,273 in 2021. Of all the incidents reported, 61.8 % were made by AAPI women.[1]

Undermined rights and status of AAPI women can be witnessed in many parts of American society. In 2021, the case of missing woman Gabby Petito garnered a huge amount of media coverage, yet three months before that, the disappearance of Lauren Cho, a 30-year-old Asian American woman, had very little public attention. According to The New York Times, the disappearances of people of color occur at a higher rate than that of white women.[2]

A report from Wyoming’s Missing and Murdered Indigenous People Task Force found that 710 Indigenous people were reported missing between 2011 to 2020 in Wyoming, where Gabby Petito’s remains were found. Of those missing, 57% were women, and 85% were children.[3] Furthermore, a 2016 study of four national and local news outlets found that Black Americans were “significantly underrepresented” in missing person coverage compared with the FBI’s tally of cases.[4]

Continued systemic discrimination against AAPI populations stems from multiple sources. Among those is the intersection of U.S. military installations and Hollywood. The U.S. is the largest operator of military sites globally and Hollywood often turns to overseas military intervention as a common movie theme, such as in Hearts and Minds (1974) and Full Metal Jacket (1987).

Sexual assault and harassment within the U.S. military have been a persistent problem, but the problems are compounded when considering foreign installations where extraterritoriality jurisdiction applies. Because the U.S. retains exclusive jurisdiction over its service members in many countries in Asia, it is common for military personnel to get away with an array of human rights violations, including abusive sexual behavior or crimes committed in host countries.

In South Korea, home to the largest U.S. foreign military installation, exploitative prostitution at so-called “camptowns” is a well-known fact.[5] In fact, in the initial years of the South Korean international adoption program, a large percentage of children adopted from South Korea were of mixed race because of the coordination of military sex trade in the so-called “camptowns” or Gijichon (기지촌) that developed around U.S. military bases in South Korea after the war.[6]  Read below for ESJF’s intern Esmé Lee-Gardner’s brief research on U.S. militarism and the Asian Diaspora in the U.S.

In addition to discrimination, another challenge that the AAPI population faces is the “model minority” myth, which paints the entire population as a hard-working minority achieving “American dreams.” One of the main problems with the “model minority” myth is that it often pits people of color against each other and minimizes the role systemic racism plays. It also ignores the diverse experiences of AAPI.

U.S. militarization is characterized by ideologies that perpetuate violence and economic inequity through objectification and dehumanization. In Korea, Japan, the Philippines, Vietnam, Hawai’i, and Cambodia, militarism has increased poverty among women as well as forms of sex work condoned by military and government institutions.[1]

For U.S. servicemen, militarization and its association with sex work influences how they view Asian women. Often, soldiers’ first experience interacting with local women presents these women as commodified sex, which shapes how they view women of color in other settings as well. This can work to uphold stereotypes still used against Asian women, such as assumptions that Asian women are “sexual enthusiasts,”[2] and continues to make them targets for sexual objectification.

In Okinawa, Japan, when U.S. military personnel wish to marry a local Okinawan woman, they are required to go through a lengthy procedure known as the Marriage Package, consisting of many documents and a “premarital seminar.”[3] This seminar perpetuates heteronormative, colonial ideas about an ideal military family and upholds an agenda of unequal power relations between the soldiers and the local Okinawans. These marriage processes contribute to an attitude of entitlement and superiority for the U.S. servicemen. For example, while language barriers are often an issue, the burden on learning English is placed on the Okinawan spouses. The U.S. military does not seem to teach or advocate for cultural awareness of the surrounding country and people who live there, which in turn perpetuates a feeling of “us vs. them.”[4]

While individual military servicemen may not have consciously racist or sexist attitudes toward their spouses, the military institution—and specifically premarital seminars—reinforce social and economic inequalities and present them as natural gender and cultural differences.

Korean “Camptowns” and the Militarization of Sex Work

With the arrival of the U.S. military in Korea and the pop up of camptowns (temporary U.S. military camps), also came the militarization and commercialization of sex work, which was condoned and reinforced by both U.S. and Korean governments. Sometimes referred to using the term “desire industries,” local women and U.S. male soldiers’ interactions experience unequal power relations, accentuated by economic disparities, cultural and language differences, and violence.

Some women who work in the Korean camptowns marry U.S. military personnel, which can be seen as a solution to leading a “normal life” as a woman and mother, and some even immigrate to the U.S as “military brides.” However, they are often viewed as traitors and face stigma and discrimination from Koreans living in Korea, as well as second-generation Koreans in the U.S.[5]. These military brides are simultaneously praised for their sacrifice to their nation, defamed for their “immoral” actions, and pitied for what some view as their victimization at the hands of U.S. imperialism.

However, many camptown women don’t marry the soldiers who purchase their sexual services and are instead abandoned by the soldier if they become pregnant. In these cases, their children are born into a society where they find no sense of belonging. Camptown women are often removed from their family registries, and they and their children are treated as non-citizens.[6] The children face extreme stigma and with no legal Korean citizenship, are in effect left stateless.

Despite the fact that not all Korean women engaged in relationships with U.S. military personnel are sex workers, and not all biracial Korean children are resulting from such relationships, they are still stigmatized and viewed as reminders of U.S. intervention. Due to the strong association between U.S. military presence and sex work, many people incorrectly presume that a transnational relationship or biracial child is the outcome of such association. As such, many Korean camptown women and their biracial children are seen as both physical reminders of the instability of war and of a dependency on America. Mixed-race Korean children are viewed as the embodiment of political and cultural tensions relating to wartime sex work and unwanted military presence, whether their mothers even engaged in sex work or not.[7]