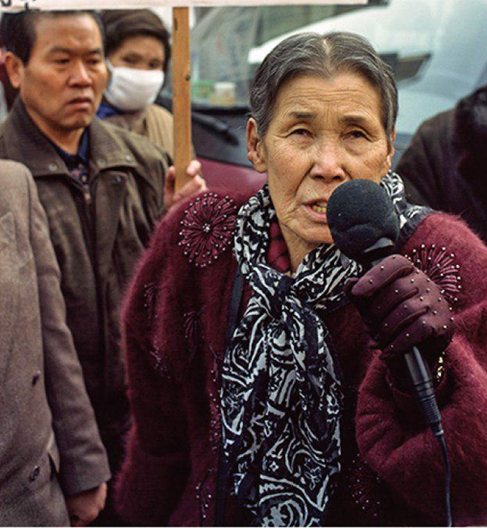 Hak-Soon Kim (1924 – 1997), first victim to testify in public on August 14, 1991, speaking at the Wednesday Rally in 1996 - Photo credit: The Korean Council (from exhibition Truth & Justice: Remembering “Comfort Women”)
​The term “comfort women,” which was used when recruiting young girls and women, is a translation of Japanese “ianfu (慰安婦).” Referring to Japanese military sex slaves as “comfort women” is a distortion because it disguises the darkness and inhumanity of their reality. In fact, survivor Yong-Soo Lee (Korea, b.1928) refuses to be referred to as a former “comfort woman.” The “comfort” was meant only for the Japanese imperial soldiers, not for the sex slaves themselves. However, since the Japanese military sex slaves are most commonly referred to as “comfort women,” this term is used on this website, enclosed in quotes to indicate its dehumanizing nature.

“Comfort women” were the victims of a military sexual slavery system initiated, operated, and expanded by the Japanese Imperial Army from the 1930s until the end of WWII.[1] During that timespan, this system forced over 200,000 girls and women[2] from at least thirteen Asian countries into sexual slavery. The first known “comfort station” was established in Shanghai in 1932, and after the Second Sino-Japanese War broke out in 1937, the number of comfort stations multiplied.[3] As Chung-Ok Yun (b.1925), Professor Emeritus at Ewha Women’s University, stated, the term “a women’s labor corps” was used instead of “comfort women” in forcibly recruiting girls and women.

Depending on the degree of control that the Imperial Japanese government had on each of its neighboring countries, young girls and women were recruited, coerced, or forced into the military sexual slavery. Various methods, including kidnapping, deceptive recruitment, pressure on families, and human trafficking were used to operate the military sexual slavery system against international treaties.[4] Though those who survived their enslavement were freed at the end of WWII, most remained silent about their experiences for several decades.

On August 14, 1991, Hak-Soon Kim (1924 -1997) made the first public testimony as a former “comfort woman." Her testimony began with her statement, “저는 일본 군대 ‘위안부’로 끌려갔던 김학순 입니다” (“I am Hak-Soon Kim, forcibly taken as a ‘comfort woman’ for the Japanese military”). It paved a way for the victims to come forward and to unite the victims and their supporters, thus beginning the international movement for peace and women’s rights.