On September 13, 1946, a year after Japan’s surrender in WWII, the Chiba Korean Elementary was opened as a school for the children of Korean forced laborers in Chiba Prefecture. These forced laborers had been brought to Chiba and surrounding areas by the Japanese military before and during WWII, and their children had not had access to formalized schooling. Although housed in a dilapidated building, the school signified a chance for the children to learn the language, history, and culture of Korea while living in Japan. In 1962, the school moved to a newly-constructed building and added a middle school.

Throughout the school’s history, as faced by most Korean schools in Japan, Chiba Korean Elementary and Middle School has endured ongoing state-sanctioned educational injustices based on ethnicity.

Since 1972, Korean schools in Japan have held annual student art exhibitions alongside other Japanese schools. Despite long-existing ethnic discrimination in Japan, these art exhibitions have provided meaningful opportunities for increasing mutual respect and understanding between Korean descendants living in Japan and native Japanese citizens. A student’s entry into the exhibition is based on juried awards.

In December 2016, Chiba Korean Elementary and Middle School held the 45th Student Art Exhibition. Chiba Mayor Toshihito Kumagai, who attended the exhibition, spotted two pieces of artwork by high school students of Korean ancestry. Student Yun-Soo Jo’s artwork expressed her opposition to the flawed 2015 “comfort women” agreement between the Republic of Korea and Japan, while student Ae-Hyang Kang’s piece expressed sympathy for the victims and survivors of Japanese military sexual slavery. Because this student art expressed objection to the Japanese government’s position regarding “comfort women” issues, on April 27, 2017, Mayor Kumagai announced his decision to cut annual city funding for Chiba Korean Elementary and Middle School. This amounted to a loss of 500,000 JYP (around US$4,757 in 2017), which had organized the exhibition with that fund. In response to this injustice, the principal, Yusop Kim, said, “It’s wrong to repress the students’ freedom of expression and to bring politics to interfere with education.” In May 2017, Mayor Kumagai won re-election to a third four-year term.

The Education for Social Justice Foundation raised US$5,000 to make up for the lost funding in summer 2017. Since then, ESJF has been supporting this school, and in 2021 began a student art competition held solely for the students at Chiba Korean Elementary and Middle School.

​​Here are photos of student artwork and the accompanying narratives that resulted in a funding cut from the city of Chiba.

​“Women under twenty years of age were taken by imperialistic colonialists as military sex slaves. The women and girls became the subject of sexual violence and were treated like toys. Their dignity as Koreans and as women was trampled. They are lonely victims whose voices don’t carry much weight, even seventy years after the war has ended. On December 28, 2015, without consulting the survivors, the Japanese government gave one billion JPY to the Republic of Korea under the condition that Korea remove the Peace Girl statue installed in front of the Japanese Embassy in Seoul.

The deal made by the two countries was supposedly “final and irreversible,” indicating the Japanese colonial crimes committed toward Korea could no longer be discussed.
​
This decision made me burst with fury. We should never forget the problems associated with Japanese military sexual slavery and should squarely face the fact that Korea was subjected to a slavery system by the Japanese imperialists. The Japanese government must apologize officially and make legal reparations to these survivors. We are responsible for creating and maintaining the society where the dignity of every single person is respected.”

​​Yun-Su Jo’s painting, entitled “What Requires Reparations,” was displayed at the 2019 Aichi Triennale, “Taming Y/Our Passion” 「情の時代」.  This was the fourth international art festival held every three years since 2010 in Aichi. Part of the 2019 Triennale was the exhibition titled “After ‘Lack of Freedom of Expression Exhibit?, 「表現の不自由展・その後」.”  It was shut down in three days instead of running it until October 14. One of the art displays was Peace Girl statue, which symbolizes victims of Japanese military sexual slavery. Nagoya Mayor Takashi Kawamura who demanded the shutdown argued that “the exhibition could give the wrong impression that Japan accepts a South Korean claim that comfort women [Japanese military sex slaves] were forcibly taken by the Japanese military...”[1] 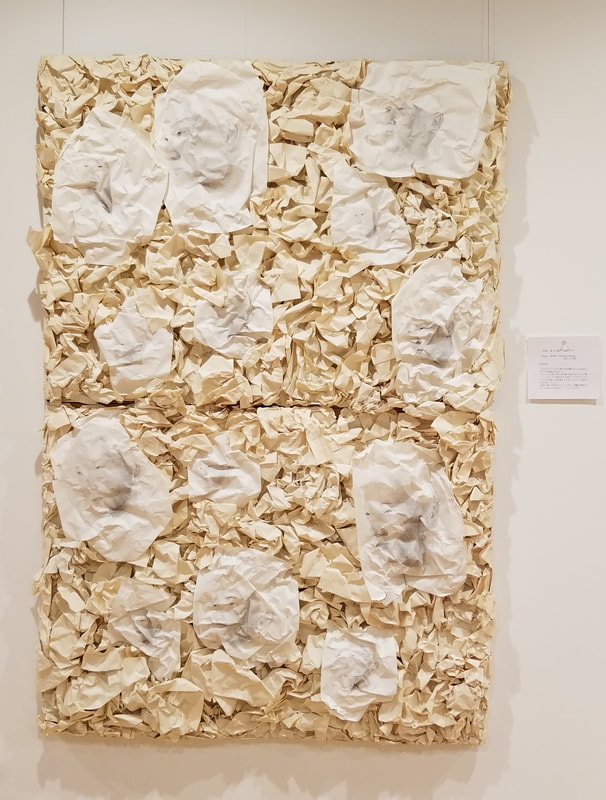 ​
“Numerous girls and women who wanted to survive had their rights forcefully taken. Presently, the living witnesses of history are dying, afflicted by the force of those who try to cover up the truth. Survivors, whose time ended when their youth was trampled, are leaving us one by one.”
​
​Please send your support to Chiba Korean Elementary Middle School

ESJF has been supporting this school since the summer of 2017. If you’d like to make a donation, please send us a check and indicate that your donation is for the Chiba School. ​Please make your check payable to Education for Social Justice Education Foundation and mail to