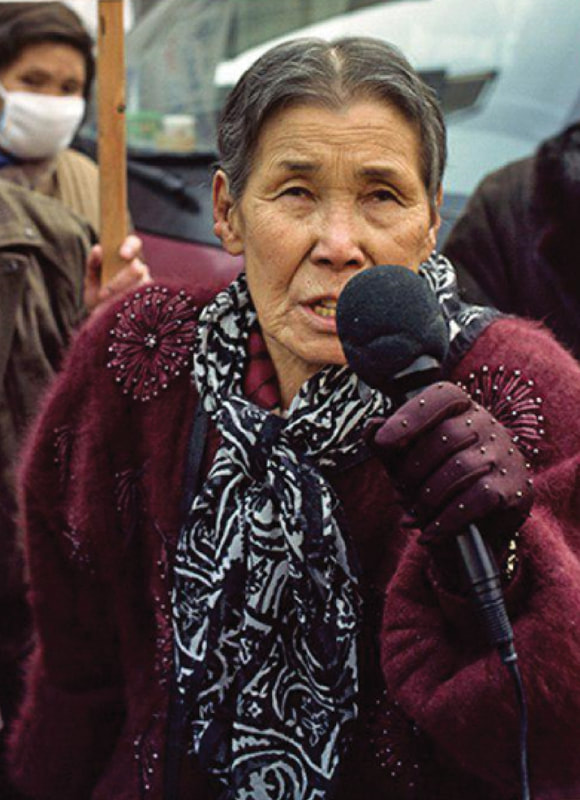 Above Hak-Soon Kim (1924–1997), the first survivor to testify in
public on August 14, 1991, speaks at the Wednesday Demonstration in 1996, a weekly protest held in front of the Japanese Embassy in Seoul that amplifies the voices of survivors of the Japanese military sexual slavery system.

Photo credit: The Korean Council (from the exhibition Truth &
Justice: Remembering “Comfort Women”)
​The term “comfort women,” “ianfu (慰安婦),” is a euphemism referring to Japanese military sex slaves before and during World War II. The “comfort women” reference disguises the darkness and inhumanity of repeated violence and rape. Indeed, survivor Jan Ruff-O’Herne (a Dutch-Australian born in the Dutch Indies, present-day Indonesia, 1923–2019) refuses to be referred to as a “comfort woman.” She said, “We weren’t ‘comfort women’ … it means something warm and soft and cuddly. We were Japanese war rape victims.”[1] The “comfort” was meant only for the Japanese imperial soldiers, not for the sex slaves themselves.

“Comfort women” were the victims of a military sexual slavery system established, operated, and expanded by the Japanese Imperial Armed Forces from the 1930s until the end of WWII.[2]  During that timespan, this system forced more than 200,000 women and girls across Asia into sexual slavery.[3] The first known “comfort station” was established in Shanghai in 1932, and after the Second Sino-Japanese War broke out in 1937, the number of comfort stations multiplied.[4] In 2017,  at the conference “Japanese Military ‘Comfort Women’: Remembrance of Post-Colonization and Cultural Re-Actualization,” Chung-Ok Yun, Professor Emeritus at Ewha Woman’s University, stated, “Instead of the term ‘comfort women,’ the term ‘Female Volunteer Labor Corps’ was widely used in the ‘40s. The majority of Koreans rarely heard or used the term ‘comfort women’ in the ‘30s and ‘40s.”[5]

During the 1930s and 40s, among the Japanese soldiers,  “comfort women” were considered as a gift from the [Japanese] emperor.[7] In his wartime diary, From Shanghai to Shanghai, Aso Tetsuo (served 1937–1941), the first Japanese medical officer who had been ordered to perform health examination on military “comfort women,” wrote that he noticed that “the women were transported under the clause covering the transport of supplies.”[8] In 1939, Aso recommended that “‘comfort stations’ ... should not be considered amusement facilities, but similar to hygienic, shared toilet.”[9]

The Japanese government’s own study “On the issue of Wartime ‘Comfort Women’” states that “these recruiters resorted in many cases to coaxing and intimidating these women to be recruited against their own will, and there were even cases where administrative/military personnel directly took part in the recruitment”[12] These “comfort women,” who were forced into Japanese military sexual slavery against their will and international laws, were deprived of four types of freedoms: freedom of residence, freedom of movement, freedom to decline to have sexual intercourse, and freedom to quit.[13]

Surviving victims testified that, at the end of WWII, the Japanese Imperial Armed Forces either mass murdered “comfort women” or abandoned them. The trauma they experienced didn’t liberate them when Japan surrendered in 1945. For decades, the Japanese government has been masking or denying the history of “comfort women.” In response to this injustice, the surviving victims and their supporters in many parts of the world have worked together to bring justice to this sidelined history since the early 1990s.

Activists began calling the victims and survivors of Japan’s WWII military sexual slavery system “grandmothers” rather than referring to them euphemistically as “comfort women.” The girls and young women who were once sex slaves had grown old by the time they broke their silence. The following words mean “grandmother” in different languages in Asian countries mentioned in this guide. The Chinese words for “grandmother” below are terms used by Asian activists in the women’s movement.