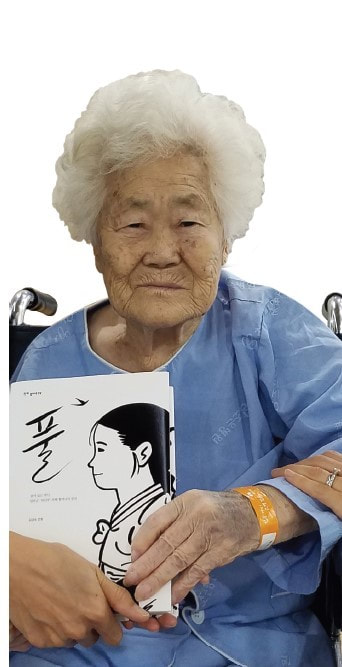 Ok-Seon Yi was hospitalized briefly the day Grass, the book that recounts her story, was published. She is pictured here holding a copy of the book. Ok-Seon regained her health soon after and was released from the hospital. August 12, 2017 Photo credit: ESJF
​In South Korea, on December 27, 2017, the Special Task Force on the 2015 “comfort women” agreement between South Korea and Japan reported that part of the agreement was made in secret. In exchange for the money from Japan, South Korea was to establish a foundation to help the survivors, provide no support for other efforts to install statues or monuments related to “comfort women” in other countries, stop referring to the victims as sex slaves, and remove the “comfort women” [Peace Girl] statue in front of the Japanese embassy in Seoul. This agreement was denounced by the surviving victims and international community. Education for Social Justice Foundation (ESJF), a San Francisco-based grassroots educational organization, launched a joint international petition with other human rights advocacy groups and education organizations to demand a nullification of the agreement, dismantlement of the foundation called Reconciliation and Healing (which was established with the one billion JYP), and the return of the funds to Japan. The petition was sent to the Ministry of Foreign Affairs of Republic of Korea on January 7, 2018 (Appendix B). On January 9, 2018, the South Korean Foreign Minister Kyung-wha Kang announced that the South Korean government would return the money received from Japan as part of the 2015 agreement. On January 23, 2018, the Minister of Gender Equality and Family Hyun-back Chung expressed her hope for the South Korean government to disband the Reconciliation and Healing Foundation by the end of 2018.[1] President Moon Jae-in announced to Prime Minister Abe during a September 25 summit at the U.N. that the Reconciliation and Healing Foundation had “failed to function properly due to objections from the comfort women survivors and South Korean public” and that “we need to bring it to a judicious conclusion.”[2]